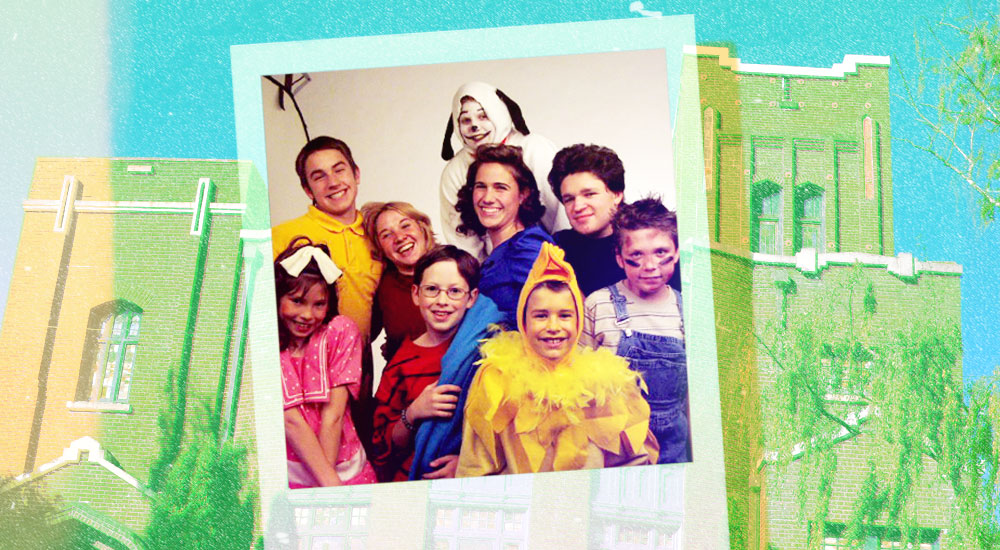 Journey Theater has been a force for good in the greater Portland/Vancouver area for years now, touching the lives of thousands and thousands of people. Here is the story of how Journey came to be, straight from the memory of our Founder, Bethany Larson.

Winter 1998 was the first session of Christian Youth Theater (CYT) in Spokane and we were excited for Levi (6 years old) to take a class. It was a great fit for a kid who loved to sing! We were so impressed by the Showcase performances at the end of the session; and were blown away when we went to see the show – Charlotte’s Web. Who knew a cast and crew made up of 8 to 18 year olds could bring that much character and talent to the stage? And it was such a blessing to us that all this was happening in a Christ-centered environment. Levi couldn’t wait to be old enough to audition!

His time came in Winter 2000. The show that session was Annie…I told Levi that I didn’t think there would be a part for him. That thought was reinforced when we got to auditions and there were sooooo many students there to audition! We were surprised when he was cast as a member of the Hooverville Ensemble and even had a little solo (“Hey Herbie”).

Our lives were a little crazy at that time; I was pregnant with our third child (Maggie), our middle child (Brenna) was 3 ½ and my husband, Allen, was in the midst of a job transition. In spite of those things, we were so excited to be a part of something so excellent and fun! I’ll never forget attending that First Parent Meeting – my mind was spinning… I was assigned to be on the Refreshments Committee and the show was just a few weeks after my due date.

By the time the Second Parent Meeting rolled around, I had a newborn and Allen was working 6 hours away in Vancouver. During performances, the show’s choreographer held Maggie for me during intermission so I could do my committee work. Levi was making friends and learning so much about teamwork and responsibility. And the best part was that everything was rooted in Christian values; truly the reason it all worked.

Levi was cast in more shows and I had the privilege of teaching a Musical Theater class. I found “my” committee – Show Chair. We were immersing ourselves in the program and I was learning all I could as I knew we’d be moving soon and I wanted to bring this amazing opportunity to Vancouver.

Before we moved in the summer of 2001, I contacted CYT headquarters to see what it would take to start a branch. They had an outline of what to do and I used that as my marching orders. In February of 2002 we held an “Interest Meeting” with just over 100 people in attendance. While the parents sat in an informational meeting, the students learned choreography and lyrics to “Go Go Go Joseph” and performed at the end of the meeting. Dozens of parents signed their kids up for our summer camp “Broadway Kids” on the spot.

Everything was going great until the person who had agreed to be our Artistic Director decided it wasn’t a good fit for her – just a month prior to our first camp. I called Justin Parks, Expansion Director at CYT. He told me they had been training a director who would be a great fit; several weeks later Beka Hardt arrived! Her love for Jesus coupled with her love for kids was just what we needed for a strong start!

Now to find a theater.  I thought the Columbia Arts Center would be perfect – but the owners wanted $5 from every ticket we sold… we were only planning to charge $5 a ticket! I had to figure out a way to make it work. I did some more digging and learned that they were used to the shows they hosted selling less than 30 tickets per performance; and the renters were not taking care of the space or equipment.  We worked out an agreement and were set for our first show!

Fall classes brought over 70 students and 42 auditioned for “You’re a Good Man, Charlie Brown.” Our parents, 100% new to theater, really outdid themselves. One of my favorite memories is how the dad who was Tech Chair checked out a book from the library on how to run sound – and he did an amazing job! The costumes were beautiful. The cast was amazing. The show was a huge success. We were so thankful to God for his provision of an Artistic Director, venues for classes, rehearsals and shows, teachers, artistic team members, students and parents.

Fast forward 10 years to 2012. Over the years we added class and show areas in East Vancouver, Portland and Beaverton. CYT Vancouver/Portland was 10 years old and had been through some major financial struggles. These struggles necessitated big changes in order for us to continue serving local families. Our Board made the decision not to sign the renewal of our licensing agreement with CYT headquarters to help decrease ongoing expenses. We changed our name to Journey Theater at that time, and yet the heart and soul of the program remains the same. Today, Journey’s classes serve more than 700 students each year. Many of those students serve as cast and crew in our 12 musicals and plays each season. Since 2002 Journey has been a part of the lives of over 7,500 kids and their parents, in addition to thousands of patrons. We are so thankful for the Lord’s sustaining provision over the last 18 years and we are excited to see His work through Journey Theater in the future. A big thank you to each of you who have been a part of this community and played a part in making a difference in the lives of local youth.